This is a pen that was hard to resist; I tried. Having already been introduced to the Souverän model with my M605 I had a sense of what I was getting into. Still, this is an M805 which is longer, thicker, has a larger nib, and the piston is made of brass instead of plastic. After receiving some advice via an Instagram post I decided to give the M800 series a try. Here are my first impressions of my M805 Stresemann.

Why I Got It

I love the look of my M605 Black-Blue. To date it is the most beautiful pen in my collection. Unfortunately it is also a tad too slender for ultimate comfort. Having been introduced to oversized pens I now know that I like fairly thick pens. With that revelation an M800 series pen was on my “some day” list. When the M805 Stresemann was announced I immediately was attracted to its quiet, muted tones. When one became available on the FPN Classifieds for an exceptional price a deal was struck. 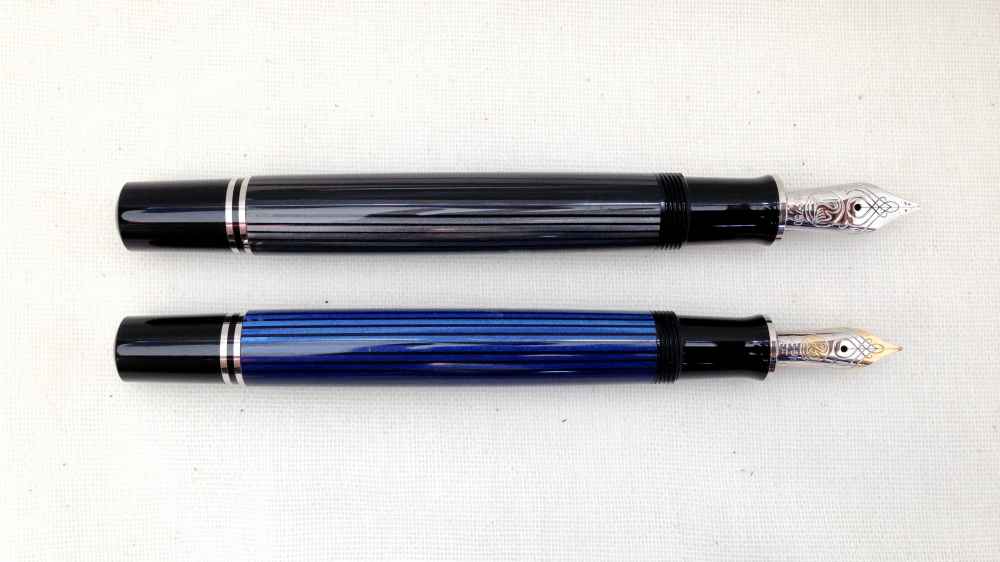 Normally I don’t care how a pen is presented. I don’t relish the notion of paying for a fancy box that I must dispose of, or store (I store them all). In this case I was somewhat excited to get the packaging, mostly because this pen came with a bottle of Pelikan Edelstein Onyx. I am given to understand not all M805 Stresemanns came with a bottle of ink, and even then, they are more expensive than the deal I got. So in this instance I’m rather pleased. 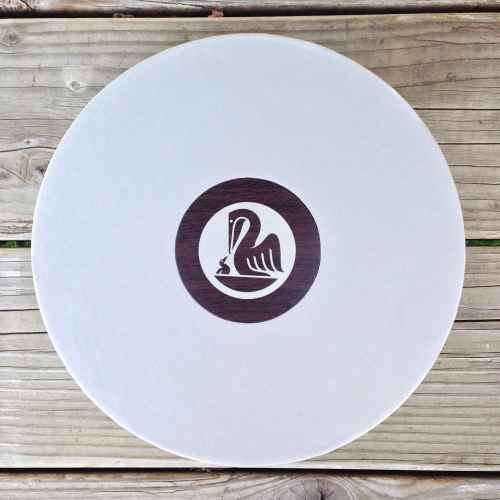 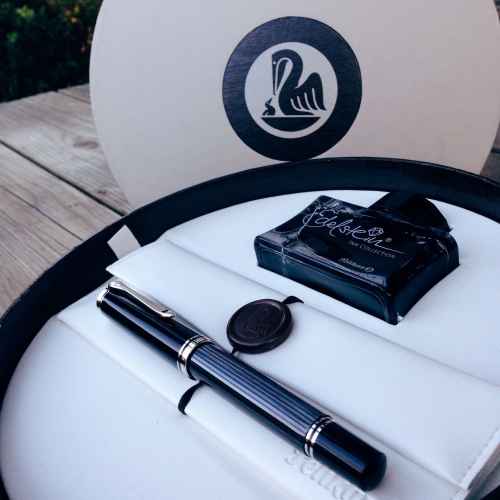 I don’t have any other circular pen boxes; most of my boxes are rectangular. There is something appealing to this box. Maybe it is because I have nothing else like it, or maybe there is something about circles themselves that I am drawn to, either way I’m drawn to this box. There is some heft to the box, enough so that I feel confident that when the box is set down it won’t be accidentally moved. The bottom has some felt which helps to add a some friction and grip to it. The pen, and ink, were well protected and I will admit it was quite a treat to open it all. 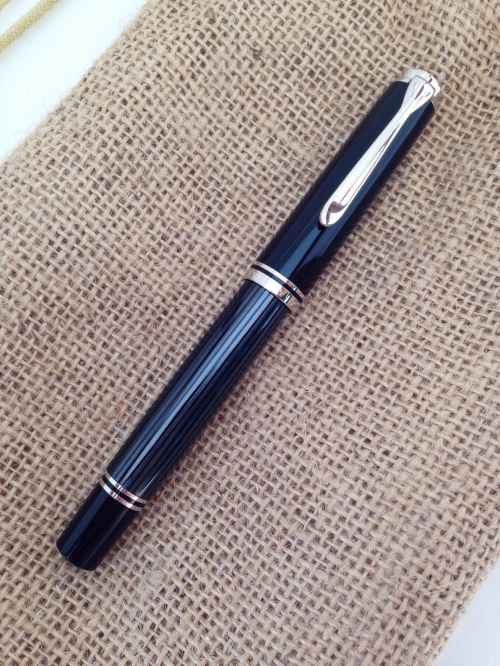 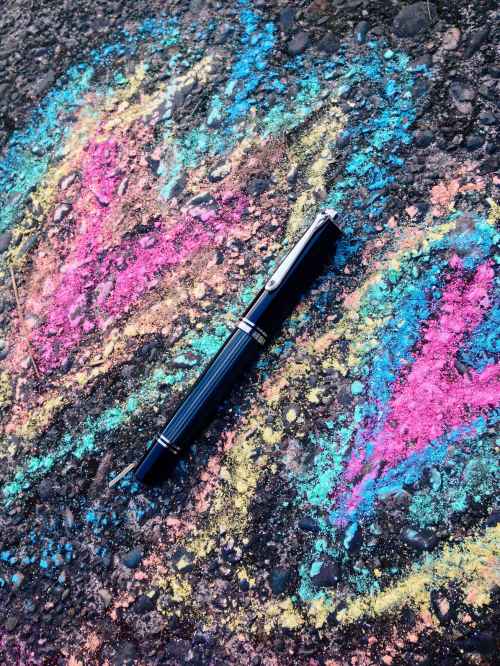 Pictures aren’t always representative especially when it comes to some pen materials. I know that my M605 looks richer in person than in any photo I have seen. Some of the photos of this pen made it look bland and boring, which was not what I expected from Pelikan. I assumed, rightly as it turned out, that the grey strips have a depth to them that wasn’t captured well in those original photos I saw. It wasn’t until owners began posting their own photos that I was able to see the nuances I was expecting.

In person the pen does not disappoint. It has a stately bearing; this is a serious pen for serious writing. And yet, there is nothing about it that prevents one from using it for more casual scribbles. It feels formal, but not stuffy, like a good comfortable suit that you’d wear both at home and out at events. 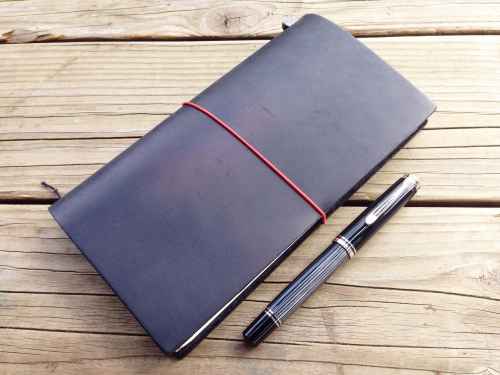 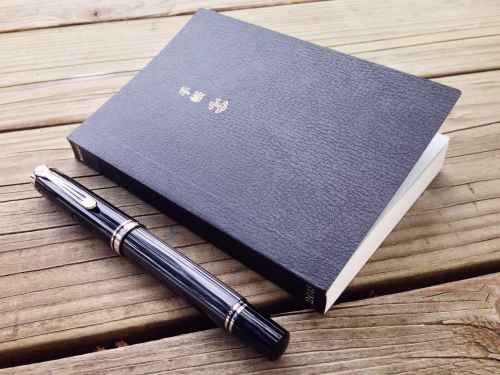 I have not yet filled the pen with ink (what is wrong with me?!), but I have held it in my hand and felt the balance. The piston mechanism adds a noticeable weight to the pen, a weight I found missing in the M605. I’m not yet worried about the pen being too back heavy. I have to post my M605 and I don’t believe I will be posting this pen; I expect the difference in weight and balance between the M605’s cap and the M805’s piston to be negligible. What I like about this pen is that it has a presence in the hand. I’m still shocked at how light the M605 feels, but the M805 matches my expectations. 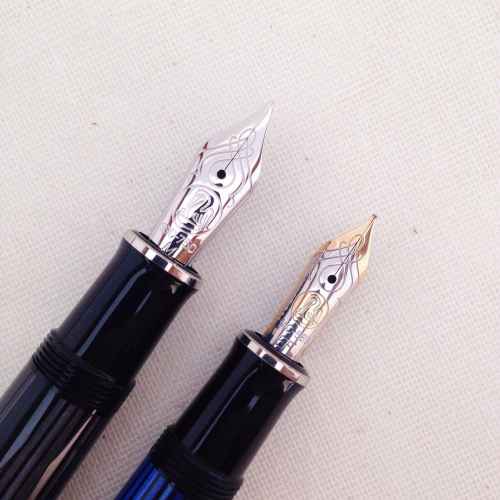 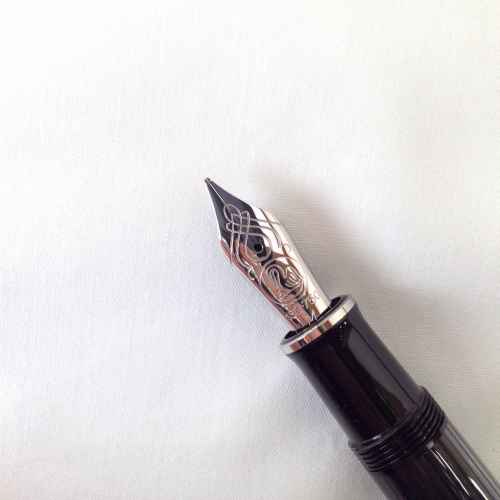 Since I bought this pen from a private party I didn’t have any nib options; it is a factory medium, but one day I hope to replace it with, or re-grind it to, a 0.5mm italic. That said I will give the medium nib a chance; I have two other medium nibs I cannot bear to modify. I’m curious to see how this one compares to those and if it too will earn the right to remain unmodified.

This nib, unlike my M605 nib, is monotone: it is entirely rhodium plated. Normally I prefer duotone nibs, but on this pen would clash with the overall aesthetics.

So far, I am happy with my purchase. It has lived up to my expectations as far as it can without being used. I will fill it soon, probably with the included Onyx ink. Then, maybe, I’ll give the pen a Second Look.